What’s old is new again, especially with my resolutions this year. 2015 was quite a year. In fact, I found out I was pregnant a mere seven days into the year. (A year ago today, you might note.) Shortly after that positive pregnancy test, my 10+ weeks of constant nausea set in and most of the 2015 resolutions I wrote about went out the window.

Our life this year is 10,000% different than it ever has been: balancing an infant (he’s older than three months and no longer considered a “newborn”) with a full-time job, a side business, wanting to see my friends and family, and getting some actual sleep will take some work. We’ve laid a solid foundation, but have our balancing work cut out for us this year. So the word of my year is balance.

Here are my 2016 resolutions. You’ll recognize some redundancy from 2015:

Eat balanced. Every year we end up with a new approach to food (2015, 2014, 2013, 2012) and 2016 is no different. It is, however, a bit more relaxed than years past. In 2015 I was nauseated for more than 1/5 of the year, often only able to eat plain quinoa or mozzarella, dropping 12 lbs during my first trimester. Thanks to the hottest summer on record in Seattle and no air conditioning at our house, I retained a lot of water and gained more than 50 lbs over the rest of my pregnancy. I was very lucky that I lost all the weight very quickly (to the detriment of my gall bladder, but that’s another post for another day) but that 60+ lb fluctuation makes me want to be kind to my body, trying my best to eat healthy, good whole foods (along with a cookie every now and again, but not one daily).

No special ingredients this year. No rotating cookbooks. Just real, good food. We’ll continue purchasing organic when we can and I’ll focus my meal planning on quick and balanced meals. I’ll post some of my favorite recipes here, don’t you worry. I’ll also try and write up the reviews of the cookbooks we tried out in 2015. It was a ton of fun and we found some great recipes.

Physically balanced. Carrying around a 15+ lb weight (Baby Michael) is new this year, and I need to make sure I’m in shape for him. That could mean getting off the bus a few stops early or waking up early to hit the 7:30 a.m. barre class on Saturdays, or even indulging in a massage a pedicure; spending time taking time to take care of myself. I’m still a dedicated FitBit user and have set my daily step goal to 10,000 steps daily. It doesn’t seem like a lot, but it’s a lot more than I’ve been walking the past year, so 10k it is. I’m also making time for taking care of myself.

Drink balanced. As a breastfeeding mom, I have to drink a lot of water to maintain my supply. I plan on continuing this in 2016. Besides, it’s good for both me and Baby Michael. When I said our wine cellar was bursting at the seams last year, I wasn’t kidding. Add in nine months of really cutting back our wine drinking and we have too much wine!! Rather than waiting for a special event to uncork our “expensive” bottles, we’ve been drinking from the cellar and really enjoying ourselves. This will continue in 2016 and beyond! 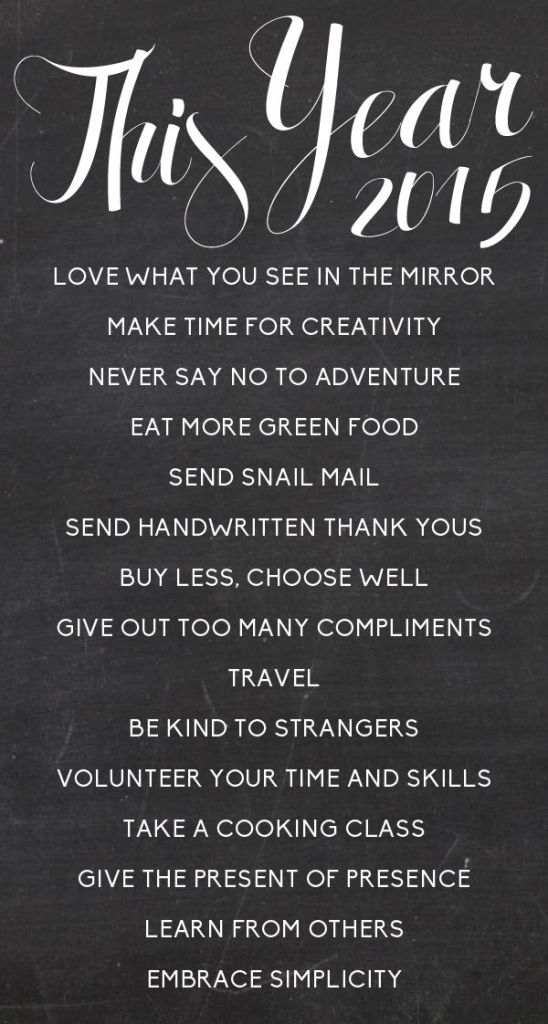