Still looking for the perfect gift or card for your Mom this Mother’s day? Look no further!

Presenting a special bouquet of flowers:

These are really easy to make:

And if you’re a visual learner: 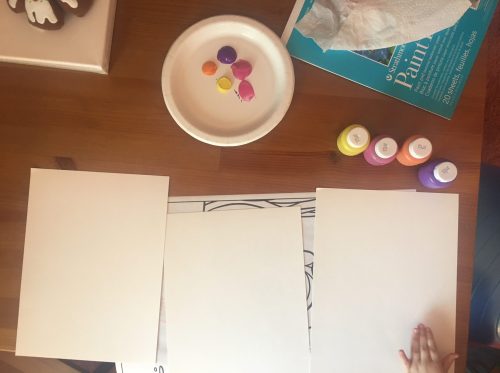 And then when the hand prints turn into painting… 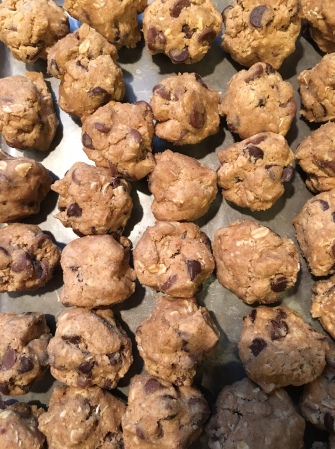 As a breastfeeding working mom I had a little help in keeping my supply up: COOKIES!

When Michael was still nursing, I tried a million recipes for lactation cookies — cookies with a purpose! An excuse to eat even more! — and my favorite one came from Milkin’ Mamas, but the link doesn’t work anymore, so I’m re-typing it here.

You know a recipe is legit if it’s posted in the lactation room at work and dated almost two years prior! Enjoy!

The BEST lactation cookies (Makes a lot of cookies! Bake extras to share with your lactation room friends! Freeze what you don’t want to bake now!)

I would make a large batch of cookie dough, bake the cookies I needed for the week and then freeze the extras, so I could bake them whenever I needed cookies.

Need other ideas for keeping your supply high? Read this post!

This post is over a year in the making. Life of a working mom, then-pumping mom, then mom, right?

Having a kid is a lot of fun, but it’s also hard work. (Like, the hardest job I’ve ever had!) One of the hardest/most annoying parts of motherhood is feeding your kid, specifically breastfeeding.

Michael was a good breastfeed-er and we hit our stride pretty early on. But, it was a task; not something I wanted to do, but something I had to do. You know, to feed my kid. Breastfeeding while you’re with the kid is pretty easy to get the hang of, but when you’re away from him and pumping? A whole ‘nother story.

Until recently, and while I was nursing Michael, I worked for the City of Seattle and while some of the city buildings only have adequate pumping facilities, my building’s “mother’s room” is amazing. In addition to a couple of mini fridges, a sink, and microwave (essentials for storing and cleaning your milk), we had plush chairs, private cubicles, and a bank of lockers to store our gear.

By themselves, these attributes made my pumping experience a bit better than some of my friends who didn’t have quite this nice of setup. But it isn’t a standalone thing. The City employs thousands of individuals, and some of them are lactating moms. This is a strong, close-knit community that I was honored to be a part of for close to a year.

It’s not easy going from months off of work, focusing solely on nurturing your new human to working 8+ hours a day, trying to pretend that you didn’t just give birth and don’t have biological needs that have to be addressed. Do you know what it’s like to push your pump break a few minutes only to have to rush to the Emergency Operations Center with your non-parent, mostly male colleagues to address citywide messaging for a huge power outage in downtown Seattle instead of “milking yourself”? I do. It’s not ideal.

I named the lactation/mother’s room the Pump Haus (or Microsoft, which is what it looks like you’re saying if your colleague mouths “milk yourself” after saying you need to leave a meeting urgently). I made some really great friendships there with moms with kids weeks or months older or younger than Michael. We talked about everything. It was a real, live chat board! The more experienced moms set many of our concerns to rest and I was thankful that I was able to pass along my knowledge to the newbies. We talked sleeping, eating, drinking not just for our babes, but also for ourselves; everything under the sun! We shared sale codes, recipes, and advice about decorating, first birthday parties, vacations, and jobs. I even took a meeting or two in the Pump Haus, with a new-mom colleague. Talk about multi-tasking!

I stopped pumping in September, after Michael’s first birthday. I didn’t realize how emotional it would be, but as I wrote a note to my fellow Pump Haus moms, I teared up. While I blame the hormones for the tears, the Pump Haus and my Pump Haus community were a huge part of last year. I count my blessings that I was able to have such a positive pumping experience, because I know that’s not always the case.

Just before the end of the year Michael nursed for the last time and seems to be doing just fine without breast milk. (YESSSSS!!!) It’s pretty freeing for me and for those of you who are struggling with breastfeeding and/or pumping, or heading back to work soon, I’m here to share my tips with you. 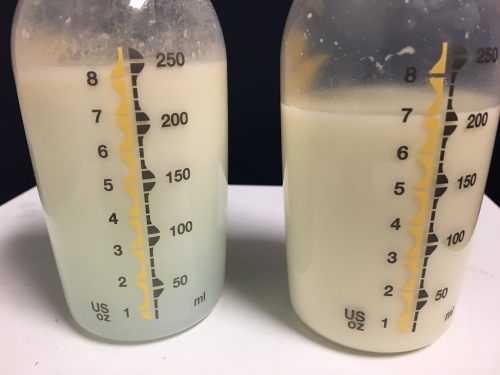 My daily haul of “milkies”

I think that’s it. Happy pumping!

Don’t let this happen to you! Pay attention to clean up!

Our little man turned one in September and we celebrated in style: a rustic, outdoorsy, glamping style. Here are all of the details of our big party. 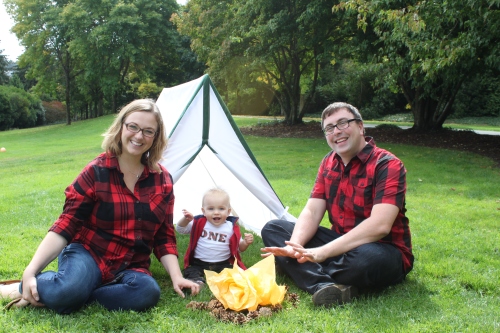 We rented a picnic shelter space on Megan’s Island, in between two large fields and adjacent to a play structure. It was a pretty sweet spot. The only thing that would make it better would have been an infant swing, Michael’s favorite thing to do at the park.

We opted for the Sunday before Michael’s birthday, which also ended up being the Seahawks home opener. We managed to squeeze the party in between Michael’s morning nap and 1 p.m. kickoff.

Food. We kept the food simple with 12 feet (FEET!) of Subway sandwiches, personal bags of chips, Aunt Nancy’s quinoa salad, and goldfish cracker packets and applesauce pouches for the little ones.

Drinks. Since it was at a park, and 11 a.m., we decided to make Michael’s party nonalcoholic. We had a delicious hot cocoa bar and juice boxes for the kids. We offered toasted marshmallow syrup, mini marshmallows, and chocolate chips to customize their ideal cocoa. 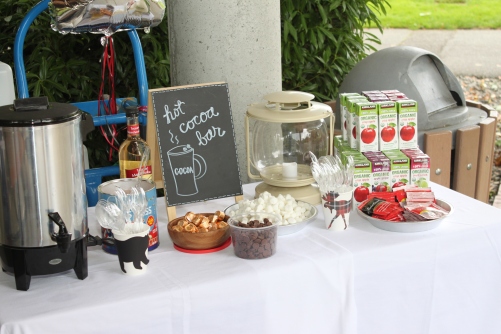 Dessert. I made these s’more cookie bars but the real star of the show was the Costco cake. Thankfully Costco makes a cake that was perfect for our party. We got the “over the hill” design minus the over the hill language.

We had such a wonderful time celebrating our little guy, ONE happy camper! 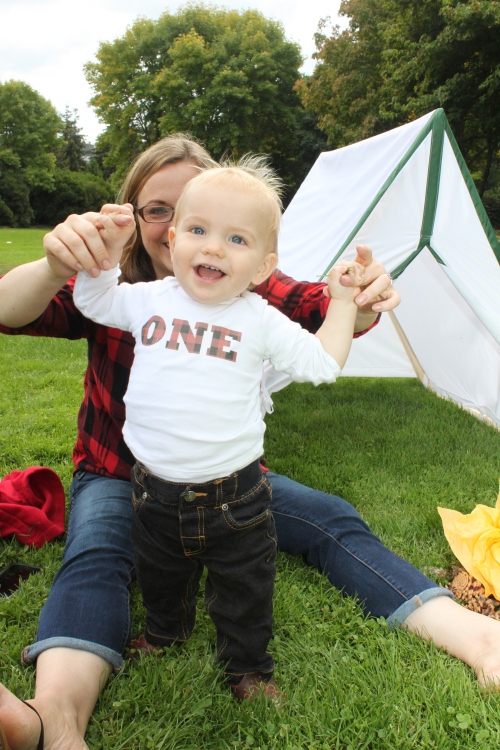 A couple of other favorite photos from Michael’s big party: 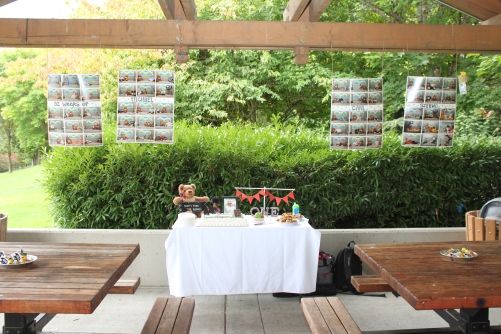 Warming himself by the fire

More snuggles! Also: the pants that inspired the party!

I had the pleasure of turning my Pinterest board into reality last week to make Michael’s preschool valentines. I know I’m biased, but I’m pretty impressed with the final product. (I really liked last year’s valentines too!) 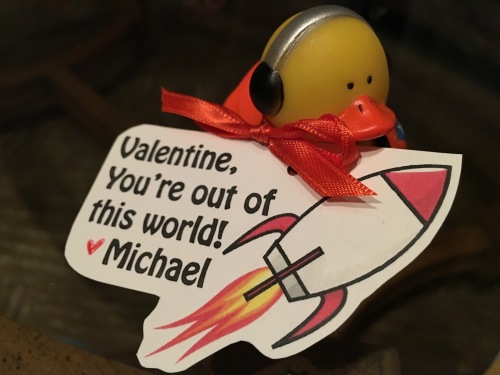 You’re out of this world, Valentine!

These valentines are super easy to make, relatively inexpensive, and don’t include sugar, so they’re good for kids of all ages:

Here is Micheal working on his valentine “mailbox” at school. He’s a crafter in the making! (And, yes, they call him “Big Mike”!)

Michael working on his valentine mailbox

Last week we celebrated a very special holiday on the Island: our sweet baby Michael turned one!

It’s been a crazy, wonderful year. We’re so excited to watch our little one grow into a boy!

We celebrated with cake… 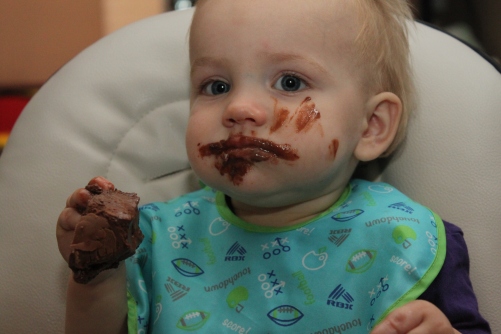 And a balloon wake up…

And a special cake from daycare. He loved it all. What a great week!

“Candle? I prefer the cake” 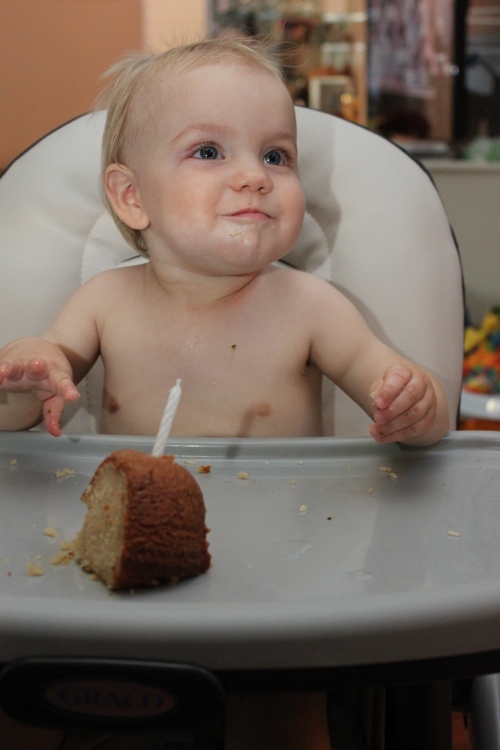 The happiest one year old that I know!

Have you seen the app Chatbooks yet? It’s one of my new favorite things and I can’t stop singing their praises.

I discovered Chatbooks on Instagram through a sponsored post, while I was on maternity leave. I had nothing but time on my hands (at least when the kid was nursing, he wasn’t very good at sleeping reliably…) so I clicked on the ad and discovered a very reasonably-priced, creative, and super easy stocking stuffer idea. This would also make a great Father’s Day gift, which is coming up in a few short weeks!

Simply put, Chatbooks is an app that allows you to upload photos and create 8″ x 8″ softcover books.

My favorite option from Chatbooks: auto books. I’m rather prolific with posting of Michael photos on Instagram and I’ve set up my Chatbooks book by simply using a hashtag on the Instagram photos I want to include in my book.

Every 60 photos, Chatbooks emails me to review my book and three days later, it prints and ships! …And I’m working on volume nine. NINE. (That’s more than one per month!)

I’ll bet you’re glad I finally filled you in on my overuse of the #babymichael hashtag on Instagram, right? Now you know!

My Chatbooks. Book #8 should arrive soon!

the moments that bring a little something special to everyday life